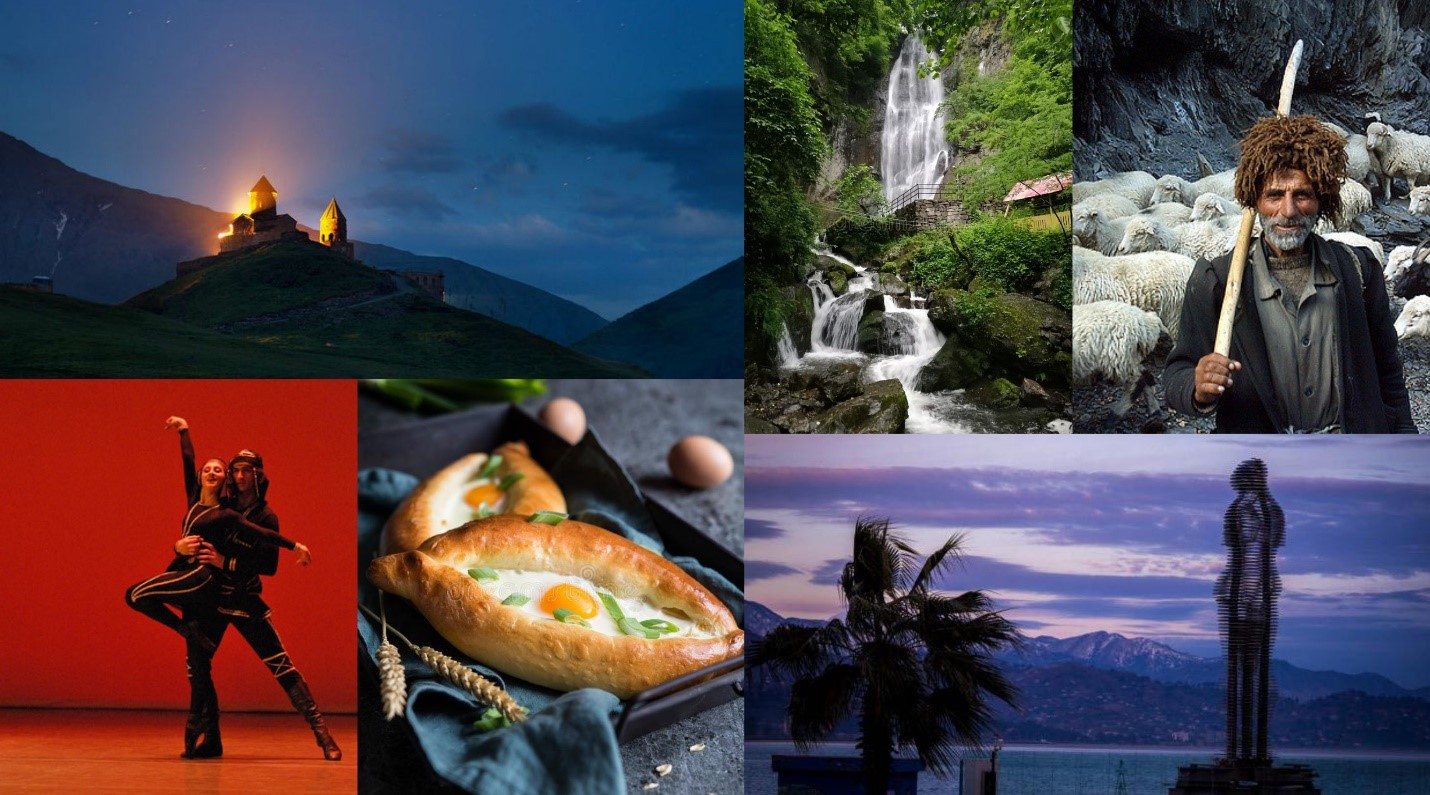 DAY 1    ARRIVAL
Meeting at the Tbilisi Airport. Transfer to the hotel. In the evening you will have a traditional dinner at the Georgian restaurant. Night in hotel in Tbilisi.

DAY 2    TOUR AROUND THE CITY
Breakfast in hotel.

After breakfast we will start the city tour! You will visit the Metekhi Church, Vakhtang Gorgasali Monument. Then you will climb the cable car, from which you will be able to watch the breathtaking panorama of Tbilisi. You will have a chance to see the beauty of the Peace Bridge, crossing Mtkvari to the fountains and paths of Rikhe Park, which houses one of Tbilisi's most impressive post-modern structures known as the Rikhe Park Concert Hall and Exhibition Center. Another highlight of the day will be visiting the National Museum. Tbilisi is revered for its impressive orthodox churches which vary from picturesque marvelous cathedrals such as Sioni and the golden domed Sameba. You will also visit Funicular, where you will have a chance to enjoy the beauty of the city. In the evening you will have a delicious dinner at the Georgian restaurant. Night in hotel in Tbilisi.

DAY 3    HIGH IN THE MOUNTAINS
Breakfast in hotel.

On this day we will visit Saint town Mtskheta and famous Monastery Jvari, situated on the pick of the mountain, where Lermontov was writing his poems. Here you will have a chance to enjoy the beauty of magnificent merge of two rivers: Mtkvari and Aragvi. Visiting temple of Svetitskhoveli – religious center of Mtskheta, where is saved The Saint Relic Chiton of The Lord. In Mtskheta you will have lunch, where you will taste delicious Georgian wine. Then you will visit family winery in Chardakhi village. And then we will drive to the Mountains. Kazbegi is a wonderful duet of beautiful nature and mighty ridges of Caucasus. We will drive to the pick of mountain Kazbegi and, of course, we will visit Gergeti Temple. On the way we will stop near ancient Ananuri Fortress. Also we will see Zhinvali reservoir. Our way will continue on Jvari pass, from where you will see breathtaking panoramic view of Caucasus ridge. Leaving Stepantsminda and driving to Gudauri, famous ski resort. Wonderful dinner in the evening. Night in hotel in Gudauri.

DAY 4    "IT´S LATE TO DRINK BORJOMI, WHEN..."
As an old friend of mine was saying:”It’s late to drink Borjomi, when…” but not about this right now. At first we will drive to Gori, the place where Joseph Stalin was born in 1878. In Gori will be organized the meeting with pottery master, George Tatuashvili in his workshop. Here you will also visit the museum of Stalin, which contains more than 60,000 artefacts from Joseph’s life. The train, in which Stalin was going to Yalta and Postdam conferences. Then driving to ancient cave town, called “Uplistsikhe”. This cave town was one of the most lively cities and also the center of pagan religion. But as my friend was saying, let’s drink Borjomi from healing stream. So we will visit the National Park of Borjomi. Borjomi -famous resort, famous for its mineral springs and healing air, rich in the aroma of coniferous-deciduous forests. Mineral springs and their medicinal properties have been known to inhabitants since ancient times. This is evidenced by the baths of crudely hewn stones. In Borjomi you will have a chance to relax and enjoy baths, jakuzi, sauna and etc. Heading to Bakuriani, another famous ski resort. Dinner in the evening. Night in hotel in Bakuriani.

On this day you will visit Kutaisi. Gelati - a medieval monastic complex near Kutaisi, in the Imereti region of western Georgia. A masterpiece of the Georgian Golden Age, Gelati was founded in 1106 by King David 4 of Georgia and is recognized by UNESCO as a World Heritage Site. Visiting the Bagrati Cathedral, is an 11th century cathedral in the city of Kutaisi, in the Imereti region of Georgia. Bagrati Temple is one of the best samples of late medieval architecture. It is distinguished by refined, harmonious proportions and graceful decor. This is a square building in the shape of a cross. In 1994 the Bagrat Temple Revival Fund was established in Kutaisi. Today the Temple is in the list of the world-significant historical and cultural monuments of UNESCO.  From Bagrati driving to Prometheus Cave. Visiting one of the biggest caves in Georgia. Kumistavi cave, also known as the cave of Prometheus was discovered in 1984. Although only one tenth is open for Inside there are underground lakes and rivers; rather high humidity and a lot of bats, which, however, do not bother tourists, as they fly very high. Wonderful dinner in the evening. Night in hotel in Tskaltubo.

Driving from Kutaisi to Batumi, capital of Adjara region. After check-in you will have a topur around the city. Located on the coast of the Black Sea, it is lined with palm trees and surrounded by mountains. Batumi is the region's tourist and gambling capital. It presents an eclectic mix of architecture, ranging from charming 19th century classical edifices to ultra-modern skyscrapers housing hotels and casinos. A regional party hub, Batumi has a vibrant night life, hosting increasingly big name international DJs and pop concerts. After the city tour we will drive to Batumi Botanical Garden, a popular spot for tourists. The Batumi Botanical Garden overlooks the Black Sea and is one the largest and richest botanical gardens in the world. Located 9km north of Batumi at Mtsvane Kontskhi (Green Cape) it contains thousands of beautiful species of plants. After taking a walk in the Garden, driving back to Batumi. You will have national dinner at the restaurant. Night in hotel in Batumi.

In the morning after breakfast you will drive to visit Makhuntseti waterfall, one of the Georgian wonders.  Makhuntseti waterfall is located in the municipality of Keda 30 km from Batumi and is considered as one of most beautiful waterfalls of Georgia. The waterfall can be reached through the famous bridge of the Queen Tamara, who is also called the bridge Makhuntseti. This is one of the largest arch bridges in Ajara, its length is about 20 meters, height – 6 meters. Near the waterfall you will have a chance to buy Georgian fruit, churchkhela, tklapi and etc. Returning to Batumi. During the free time you will be able to climb the Argo cable car, which leads to the top of the city, from where you will be able to watch the most beautiful panoramic views of Black sea. Dinner in the evening. Night in hotel in Batumi.

So our exciting trip has come to an end. You will have transfer from Batumi to Tbilisi. On the last day you will be able to take a walk at the Rustaveli Avenue. Don’t forget to visit “Dry Bridge”, an ideal place to buy souvenirs. We provide transfer to the airport. Hope to see you again!