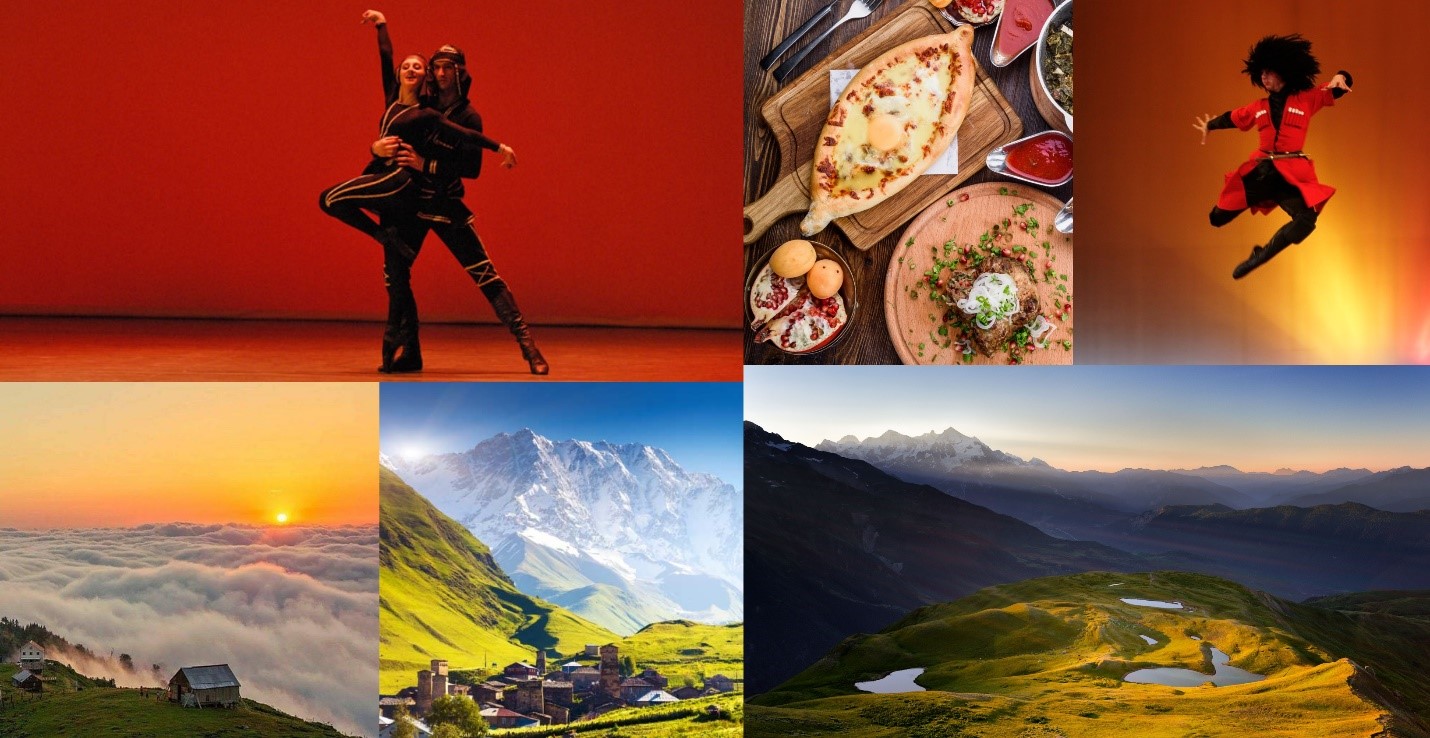 DAY 2    TOUR AROUND THE CITY
Breakfast in hotel.

The silhouette of Tbilisi is immediately recognizable and unique. It is one of the most charming and colorful places in the world. The monumental sculpture of Kartlis Deda, Mother of Georgia, stands above central Tbilisi. Across the canyon atop Mtatsminda, Holy Mountain, sits the brightly lit space needle style communications tower visible from anywhere in the city. The narrow streets of Old Town are representative of the both city's rich heritage and impressive nightlife. The cliffs of Metekhi offer romantic views of the medieval fortress of Narikala. You will have a chance to see the beauty of the Peace Bridge, crossing Mtkvari to the fountains and paths of Rikhe Park, which houses one of Tbilisi's most impressive post-modern structures known as the Rikhe Park Concert Hall and Exhibition Center. Tbilisi is revered for its impressive orthodox churches which vary from picturesque marvelous cathedrals such as Sioni and the golden domed Sameba. Night in hotel in Tbilisi.

From Tbilisi driving to Mtskheta.
Mtskheta is a city- museum, all streets are decorated in the same style - a combination of wood and natural stone. The town is small, but very picturesque and interesting. Where is one of the main Christian shrines stored - the Khiton of the Lord in the ancient cathedral of Georgia- Svetitskhoveli (11th c). In Mtskheta is the functioning Samtavro Convent (11th c.), in which King Mirian and his wife Nana are buried, the first to be baptized by the Christian faith from St. Nino in 337. The monastery was built in 1820. But it was based on a small ancient wooden church of the 4th century, built by King Mirian. Its dome and parts of the temple were rebuilt after the earthquake in the 13th and 14th centuries, and then an altar wall was built. In the 15th and 16th centuries a three-tiered bell tower was built. Fresco painting inside the complex dates back to the 16th-17th centuries. In the 17th century, the last restoration of the monastery was also carried out. You will visit the Jvari temple built in the 7th century on a historical mountain overlooking the main Caucasian Jvari range - one of the most important temples of Georgia. It is located high on the mountain above Mtskheta. From its territory opens the famous landscape of the confluence of two rivers – Aragvi and Kura.

From Tbilisi driving to Dashbashi canyon. Dashbashi canyon is one of the most impressive natural monuments of Georgia, green and beautiful all year long. Located 110km from Tbilisi and 2 km from small town of Tsalka, in village Dashbashi, Dashbashi Canyon Natural Monument is a canyon carved by Ktsia (Khrami) River in the stream bed cut through the volcanogenic rocks of Dashbash volcanic plateau, distinguished by its rarity and biodiversity. From Dashbashi heading back to Tbilisi. Night in hotel in Tbilisi.

From Tbilisi driving to Uplistsikhe. Uplistsikhe is an ancient cave city, one of the first cities on the territory of Georgia. Uplistsikhe is carved in a rock located 12 km east of the town of Gori on the left bank of the Kura River. The city appeared at the end of the 2nd - early 1st millennium BC. e., experienced several ups and downs, was finally abandoned in the 19th century and is thus a multi-layer archaeological site, one of the most important monuments of Georgian culture. From Uplistsikhe driving to Tbilisi. Night in hotel in Tbilisi.

It’s the last day of your residence in Georgia. You can go for shopping, buy souvenirs or just take a walk and enjoy the beauty of Tbilisi. Transfer to the airport.